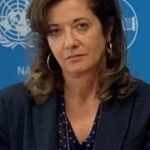 Mirella Dummar Frahi is the Chief of Civil Society Unit at the United Nations Office on Drugs and Crime (UNODC).  She holds a Master’s degree of Political Science from the Sapienza University of Rome (Italy), where she graduated presenting a thesis on the Islamic perspective of the international rule of war. In 1989, after one year in the private sector, she joined the United Nations, starting with the United Nations Relief and Works Agency for Palestine Refugees (UNRWA) and followed by the United Nations Drug Control Programme (UNDCP). From 1998 to 2002, she worked in Pakistan – covering Afghanistan as Programme Coordinator for the NGO “Society for the Preservation of Afghanistan’s Cultural Heritage (SPACH)” and served two years with the UN Office for the Coordination of Humanitarian Affairs (OCHA). In June 2002, she returned to Vienna to take up new functions in the Spokesperson office of UNODC. Since 2008, she has led the UNODC Civil Society Team and is currently responsible of a large Program, engaging civil society on drug control, the implementation of the UN Convention against Corruption (UNCAC) and the UN Convention against Transnational Crime (UNTOC). She oversees among other projects, the UNODC anti-corruption project for civil society in Southeast Europe entitled “Southeast Europe Together against Corruption” implemented in partnership with the Regional Anti-Corruption Initiative (RAI). The project is building capacities of relevant stakeholders on UNCAC and creating opportunities for governments and CSOs to work together on anti-corruption, including in the UNCAC review mechanism.