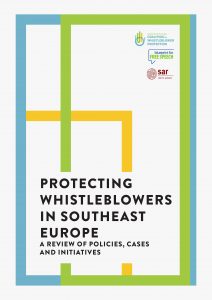 In this publication by the Southeast Europe Coalition on Whistleblower Protection, the authors recall a court case filed against a journalist for publishing “state secret information.” At the same time he filed a lawsuit seeking access to a public document. The journalist won both cases but the reality did not change: state authorities described him in several public statements as a “spy.” And, despite a legal decision in his favor, he did not receive the document he needed for his work.

This exemplifies how freedom of press has proven, time and time again, to be an unpredictable and tumultuous factor in Southeast Europe, and how journalists are obstructed in their daily work. The same can be said for whistleblowers, who must endure all manner of legal and career threats for speaking out against crime and corruption.

Political, economic and social changes in Southeast Europe have affected human rights in ways no one thought possible. This process has helped some countries reach a high level of stability and democratic practices. Others have had a more difficult time with their transitions into a more humane, tolerant and corruption-free society.

Yet, regardless of their differing levels of freedoms and democracy, all countries in the region are dealing with almost exactly the same challenges and hardships in the spheres of media freedom and human rights.

Through the work of civil society groups, activists and media workers, experiences have been compiled over the years and the conclusions are invariably similar: in most countries we still have many media outlets with non-transparent ownership leading back to ties with politicians, businessmen and tycoons. Most countries have a sharp divide between “pro-government” and “opposition” media outlets. In most cases, opponents of the ruling party find it hard to survive.

Legislative instruments have become the censoring tool of the government, utilized to prosecute media workers and outlets. Journalists are intimidated, attacked, threatened and cornered into succumbing or losing their job. Self-censorship is a reality in all countries.

Whistleblowers very often face the same challenges as journalists and media workers, and the assaults against them are frequently even more volatile than what the media has experienced. They are being persecuted by the very institutions that are supposed to protect them, and there is no praise for their courage. Their reputations are damaged, the legitimacy of their work questioned, and their decision to reveal the truth is undermined.

The fight to provide safe working conditions and eliminate censorship does not apply to media workers and whistleblowers as separate groups, but rather as one entity that has the same objective in mind: to provide factual information relevant to the public, without attempting to misconstrue or conceal the truth. Whistleblowers deserve good, wholesome laws, safe environments, and restitution for the sacrifices they make.