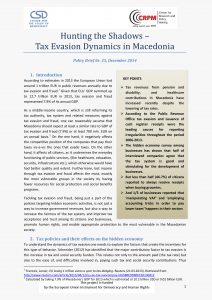 The current policy brief stresses that as a middle-income country, which is still reforming its tax authority, tax system and related measures against tax evasion and fraud, one can reasonably assume that Macedonia should expect at least a similar rate to GDP of tax evasion and fraud (7.9%) or at least 700 mln. EUR on an annual basis. On the one hand, it negatively affects the competitive position of the companies that pay their taxes vis-a-vis the ones that evade taxes. On the other hand, it affects all citizens, as it undermines the everyday functioning of public services, (like healthcare, education, security, infrastructure etc.), which otherwise would have had better quality and extent.