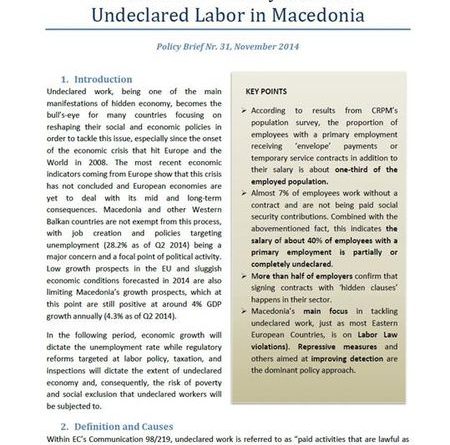 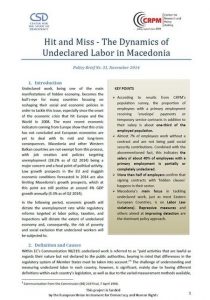 The current policy brief underlines that undeclared work, being one of the main manifestations of hidden economy, becomes the bull’s-eye for many countries focusing on reshaping their social and economic policies in order to tackle this issue, especially since the onset of the economic crisis that hit Europe and the World in 2008. The most recent economic indicators coming from Europe show that this crisis has not concluded and European economies are yet to deal with its mid and long-term consequences. Macedonia and other Western Balkan countries are not exempt from this process, with job creation and policies targeting unemployment (28.2% as of Q2 2014) being a major concern and a focal point of political activity. Low growth prospects in the EU and sluggish economic conditions forecasted in 2014 are also limiting Macedonia’s growth prospects, which at this point are still positive at around 4% GDP growth annually (4.3% as of Q2 2014).