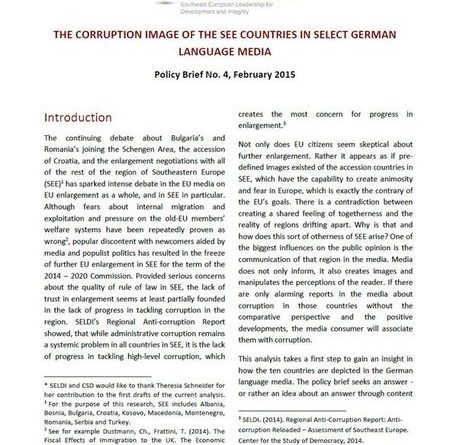 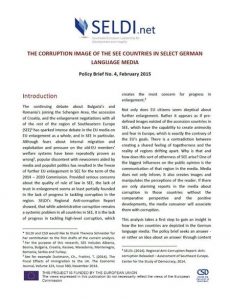 The continuing debate about Bulgaria’s and Romania’s joining the Schengen Area, the accession of Croatia, and the enlargement negotiations with all of the rest of the region of Southeastern Europe (SEE) has sparked intense debate in the EU media on EU enlargement as a whole, and in SEE in particular. Although fears about internal migration and exploitation and pressure on the old-EU members’ welfare systems have been repeatedly proven as wrong, popular discontent with newcomers aided by media and populist politics has resulted in the freeze of further EU enlargement in SEE for the term of the 2014 – 2020 Commission. Provided serious concerns about the quality of rule of law in SEE, the lack of trust in enlargement seems at least partially founded in the lack of progress in tackling corruption in the region.

The policy brief presents analysis of 320 media articles on the topic. The chosen media outlets are some of the most influential in the German-speaking area, which makes the findings particularly interesting and relevant to policy-makers in the EU, and in SEE. The time frame of the media content analysis covers 2012 and 2013, which presumably influenced EU elections and policy-making developments in 2014 – 2015.

The policy brief analyses the negative influence of the traditional energy security risks in Central and Eastern Europe and...

The promise of enlargement to the Western Balkans has suffered another delay, as the start of accession negotiations with...

Anticorruption policies have been designed and implemented exclusively at the national level with little consideration of their actual enforcement...

The European Commission has repeatedly noted the existence of state capture risks in the Western Balkans, “including links with...

The current policy brief makes an regional overview of the challenge of corruption, analyses the findings from the EU...

The national and regional energy security of Central and Eastern European (CEE) countries has become a hot topic of...

The negative effects of the hidden economy are numerous – low funding and quality of public services, no healthcare...

The President of the European Commission has announced 2025 as the target year for the next EU Enlargement in...

In 2018 the EU and NATO and the countries from the Western Balkans have a unique chance to reinvigorate...

Although judicial reforms have been ongoing for more than a decade in the countries of the Western Balkans, no...