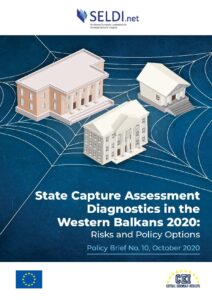 The European Commission has repeatedly noted the existence of state capture risks in the Western Balkans, “including links with organised crime and corruption at all levels of government and administration, as well as a strong entanglement of public and private interests”. State capture can generally be described as the institutionalisation of corrupt relations, leading to the virtual privatisation of governance. Instead of public goods, the state capture process delivers private goods systematically and permanently to captors (or privatisers) of government functions. Process-wise, state capture is the abuse of good governance rules (which includes abuse of power) in the process of drafting, adoption and enforcement of the rules themselves (including the laws) in favor of a small number of captors at the expense of society and business at large.

In 2020, SELDI piloted a comprehensive methodology for monitoring and exposing state capture vulnerabilities in the Western Balkans – the State Capture Assessment Diagnostics (SCAD) tool. The SCAD data suggests that the main challenge for the countries in the region remains in the form of state capture enablers, such as media control, corruption in the judiciary, lack of integrity of public organisations, lack of impartiality and inadequate anti-corruption procedures. Across the Western Balkans, the score for state capture enablers spans from 39 to 45 out of 100 (full state capture).

The data also reveals that although none of the countries is close to full state capture, i.e. authoritarian rule, they exhibit critical impairments in democratic and economic checks and balances. Key economic sectors such as energy, pharmaceuticals, telecommunications and construction show signs of monopolisation pressure potentially associated with state capture. The European Commission will need to pay particular attention to safeguarding competition in these sectors when implementing its economic and investment plan for the region, which aims to boost the economies while improving their competitiveness.