The SELDI Newsletter highlights the major developments in the area of anti-corruption and good governance in Southeast Europe (SEE). 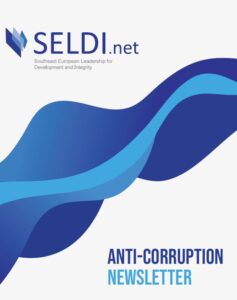 We gather information from multiple sources to provide you with the most relevant news from Albania, Bulgaria, Bosnia and Herzegovina, Croatia, Kosovo, North Macedonia, Montenegro, Moldova, Romania, Serbia and Turkey.

The articles included in the SELDI Newsletter are being carefully selected by professionals with long lasting experience in the fields of anti-corruption and good governance. Information on upcoming events, recent reports and analyses is also available for those interested in acquiring in-depth insight into the processes behind and the dynamics of the corruption challenge in the SEE region.

Issue 63: Promoting the Use of Big Data for Prevention of Corruption

Issue 62: The Western Balkans in Focus

Issue 59: The Role of the Local Communities

Issue 57: Is There Political Will for Electoral Reforms?

Issue 54: Reforms in the Public Administration

Issue 52: The Media Freedom during Pandemic

Issue 51: COVID-19 as a Threat to the Rule of Law in the Western Balkans

Issue 49: The New Approach on Enlargement: Good Ideas in Need of a Captain

Issue 48: Delivering on the Promise of EU Enlargement

Issue 45: Training CSOs on Corruption and State Capture Monitoring, Advocacy and Impact in a World of Hybrid Threats

Issue 43: Working Together with the Public and the Private Sector

Issue 41: Standing Up to State Capture

Issue 5: UNCAC Coalition and SELDI Newsletter: The Essential Role of Civil Society in the UNTOC and UNCAC Review Processes

Issue 1: A new political model in Albania to do away with corruption? (Adobe PDF, 566 KB)

* The designation “Kosovo” is without prejudice to positions on status, and is in line with UNSCR 1244/1999 and the ICJ Opinion on the Kosovo declaration of independence.