The Berlin Process initiative opened a new chapter for EU integration of the Western Balkans countries, as the Southeast Europe (SEE) region continues to experience serious governance and democratic deficits. The Balkans Barometer 2016 of the Regional Cooperation Council shows that corruption remains one of the key concerns for the people in the Western Balkans. Data from the Southeast Europe Leadership for Development and Integrity (SELDI) network points to a stagnation at best in corruption victimization levels between 2014 and 2016, which denotes backsliding in terms of rule of law and democratic development in the region despite improvements in some of the countries. The SEE 2020 Strategy seeks to close such gaps through reinvigorating the regional economy and focusing on improving governance processes. But the economic growth, prioritized also by the Berlin process, cannot be achieved without improving governance, reducing systemic corruption, and tackling state capture. And while the European Union remains the key external anchor for reforms, it is regional civil society organizations that have a crucial role to play both in terms of addressing the existing challenges and of keeping good governance high on the regional and European policy agendas.

These and other issues were put forward during a roundtable discussion, organized on 19 June 2017 in Belgrade, by the Center for the Study of Democracy and the SELDI network, with the support of the Regional Cooperation Council (RCC). The round table gathered uner Chatham House Rules representatives from RCC, the Anticorruption Agency, Serbia, the Delegation of the European Commission in Belgrade, United States Department of Justice, Serbian CSOs and SELDI. Its outcomes are going to serve as a stepping stone for SELDI’s work in the region and cooperation with government and non-governmental organizations in further tackling corruption and state capture.

The discussions revealed that the sustained  high and systemic administrative corruption in the region has turned into a precondition for state capture. Hence, the Berlin Process needs to support long-standing EC efforts to improve governance in the region by focusing on two distinct areas. On the one hand, finding a systematic counteraction to bribery and petty corruption through improving the work of the public administration and reducing the hidden economy, which would spur growth and jobs. On the other hand, the EU and governments from the region need to focus their criminal justice law enforcement efforts exclusively on higher level corruption cases and state capture. State capture subverts the logic of governance, as specific groups collude to use state institutions to their own private interest to the detriment of the public interest. In this environment, there is a need for reinforced partnership between regional CSO networks, the European institutions, and governments from the region.

Against these developments, country elites across Western Balkans understand the benefits of closer proximity and ultimately EU membership but at the same time have tried to downplay the role of EU conditionalities. Hence, the European Commission and member states need to carefully manage expectations from the Berlin Process noting that the increased attention to enhancing economic governance and growth would not come at the expense of rule of law and effective public administration objectives. At the same time the European Commission needs to make its support more visible and vocal and seek to firmly and decisively safeguard organisations in the region from being bullied and labeled as foreign agents, in particular the ones working in the anti-corruption and good governance domain. CSOs on their part have to focus on better outreach both regionally and nationally, in pursue of gaining wider public support. CSOs have to also continue increasing their cooperation with national institutions while adhering to high standards of transparency. 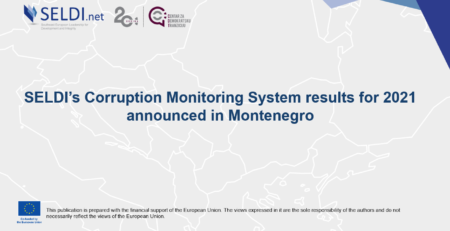 SELDI’s partner, the Center for Democratic Transition announced at their website the SELDI Corruption Monitoring System (CMS) results for Montenegro...

Round Table: The Anti-Corruption Agenda for Southeast Europe after the 2016 Enlargement Package: How to Break the State Capture Deadlock and Make Enlargement Deliver Again?

In its 2015 and 2016 Enlargement Packages, the European Commission has announced that there will not be further enlargement by...

On 26-27 January 2016 the Directorate-General for European Neighbourhood Policy and Enlargement Negotiations (DG NEAR) and TACSO organized a regional...

In the 2016 Transparify ranking, three SELDI Members were awarded five stars for a second time: the Center for the...