On 23 February 2015 the Center for Liberal-Democratic Studies (CLDS) presented the main findings of the Corruption Assessment Report for Serbia and the SELDI Regional Anti-corruption Report in Belgrade.

Dr. Bosko Mijatovic, President of CLDS welcomed the participants and introduced the speakers. He highlighted the importance of the fight against corruption, and explained the process of CSOs’ corruption monitoring. He stressed that the Corruption Assessment Report (CAR) for Serbia is a result of a unique survey-based methodology (the Regional Corruption Monitoring System) applied in nine countries from the region which compares 2001/2002 results with those from 2014. Dr. Mijatovic presented the main findings for Serbia, pointing out that the expectations related to corruption have increased; the police and customs officers are seen as the most corrupted; the decrease in corruption pressure can be related to the lesser contact with the administration. He reminded the audience that fight against the corruption is set as one of the main priorities of the government, although the general public perceives this fight as highly politically motivated, and lacking practical results (i.e. convictions). Dr. Mijatovic pointed out the judiciary as one of the major problems in Serbia, coupled with the slowadministrative processes, the series of failed reforms and the constant need to re-reform, lawyer strikes that paralyzed the entire system, etc. Dr. Mijatovic underlined that the main findings indicate low level of economic freedom and poor business environment. He listed the problems with the implementation of the Law on public procurements and other administrative obstacles in doing business in Serbia that create opportunities for corrupt behavior. Dr. Mijatovic pointed out that all major conventions are ratified, and that Serbia is active in the organizations such as Greco, Octopus, Moneival, etc. Still, the EC report from 2014 stresses that the implementation of the strategy and action plan for the period 2013-2018 has yet to demonstrate a strong political will to fight corruption, and implementation of some of the proposed measures is delayed.

Mr. Nemanja Nenadic, Transparency Serbia commented on the result that 27,4 % of the citizens gave bribe, as well as on the fact that reduction of the corruption can be achieve through reduced contact with the administration. He pointed out that this could be a good recommendation for the health sector, where the reduced administration could bring good results. The big increase in the number of people who were pressured to give bribes can be explained by the poverty in the public sector, and should not be seen as only an act of extortion. The reduced corruption in the customs is a result of the reforms in the sector, but it should also be taken into account that now people have less contact with the customs compared to 2001-2002. Mr. Nenadic underlined one more major problem – people lack confidence that 10 yearlong judicial proceedings will ever be prosecuted, which leads to a large number of corruption cases not being reported. He pointed out the contradiction between the multitude of regulations prescribed by law, and the insufficient power of the supervisory authorities to apply these regulations. Mr. Nenadic stressed that this is a unique moment for Serbia when the government has enough leeway to implement the necessary changes in the fight against corruption, but he also shared his opinion that these opportunities are underused. Serbia has the opportunity to define its commitments during the European integrations mainly in Chapter 23. In conclusion, Mr. Nenadic discussed the Law on public procurements, which still has issues that should be resolved.

At the beginning of his presentation of the results of Regional Anti-corruption Report, Dr. Boris Begovic mentioned that CLDS has a long history of research in the area of anti-corruption, and that this study is a is an excellent continuation of the research done so far. The greatest value of the report is that for the first time a unique methodology makes results comparable among countries in the region. The overall results show that the best ranked countries in the region are Croatia and Turkey, the worst ranked is Albania, when Serbia is almost somewhere in the middle. The results also show that corruption in the administration is a mass phenomenon in all the countries in the region, even those that have the lowest corruption index. Bulgaria is a very interesting case, since corruption increased since it became a part of the EU. This can be a good lesson not only for the EU regarding the admission of new countries but also for those countries that are working to become a part of the EU, since it shows that EU membership itself does not solves the corruption problems. One of the key impressions of the report is that people’s expectations regarding the performance of anti-corruption policies are higher in countries that have the lowest corruption levels (Croatia and Turkey). The perception of corruption in the civil society sector in Serbia increased since 2001/2002, which raises the question: to what extent this perception is based on facts and how the public appearances of some NGO representatives contributed to this impression.

The discussion was opened by Mr. Ljubomir Madzar, Professor from the Faculty of Economics in Belgrade. Mr. Mardzar asked whether payments to the CSOs representatives could, by definition, be called corruption. He also asked if it was possible to determine to more detailed extent the corruption in different time periods, and how did political regime changes influenced by the corruption phenomenon. Mrs. Jelisaveta Vasilic, member of the Anti-corruption Council congratulated the organizers and also took part in the discussion.

Mr. Zoran Ivosevic, Professor of the Law on University “Union”, invited the participants to further discuss the corruption in the judiciary. He recommended that the rules for the election of judges, prosecutors and their deputies should be reviewed. Mr. Ilija Vujacic, Dean of the Faculty of Political Sciences at the University of Belgrade and member of CLDS, noted that there are well-known university programs that accept students only based on tuition payment. That could be called a form of corruption, since the university diploma is in this case sold for a certain amount of money.

Mr. Danilo Sukovic, Institute of Social Sciences, highlighted that the fight against corruption has to be in the focus of the public debate and he believes that there is a high degree of apathy among citizens due to the impression that all policies are result of EU “pressure”. For example, the strategy to combat corruption from 2005 was not implemented at all in the country. In 2013, under pressure from the EU, a new strategy was adopted, and he expressed hope that it will be implemented. The key issue is the lack of political will – discussions and promises regarding combating corruption seem to be a good tool for increasing political influence when needed. In conclusion, Mr. Sukovic said that key issue is the lack of transparency and access to relevant documents of public interest.

Mr. Zarko Sunderic, SIPRU-Social Reduction and Poverty Reduction Unit, Government of the Republic of Serbia, noted that in the public’s view the corruption becomes a necessity – the only way one can satisfy certain needs. He welcomed the current CSO initiative and underlined importance of unbiased reports.

Mr. Dragoljub Bajramovic from the State Prosecutorial Council gave an example of government effort to fight corruption that went wrong. It was decided that, in order to reduce corruption, market inspectors from one city be sent to another and vice versa. Contrary to all expectations this rotation actually led to increased corruption, because the inspectors apparently had no problem to take money from complete strangers.

Mr. Vukasin Stijovic from the High Judicial Council highlighted the importance of independent judiciary and added that accountability of judges has been slightly enhanced. Delays of proceedings for example is now a cause for punishing the judges and even for their dismissal. 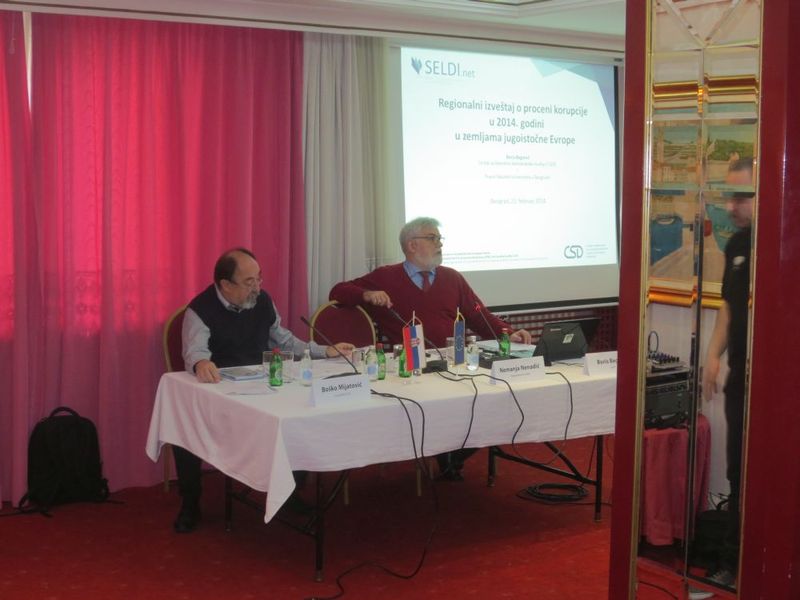 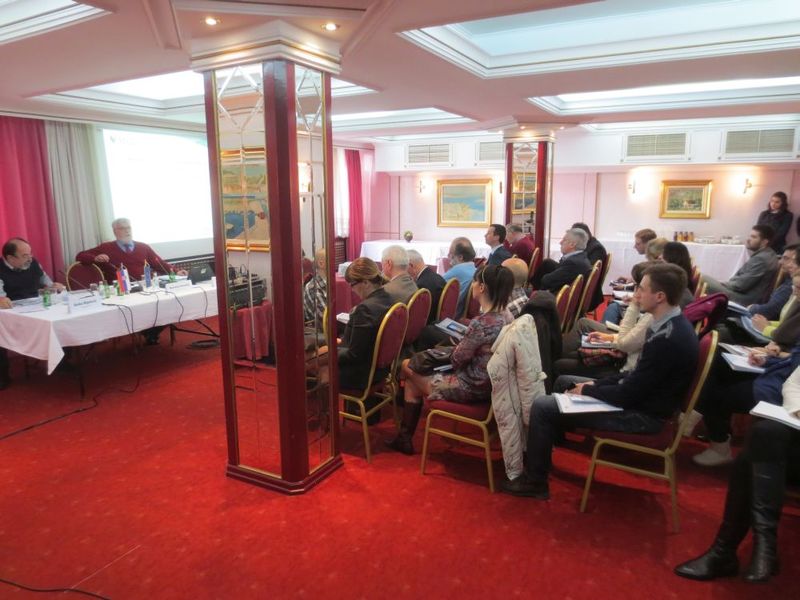 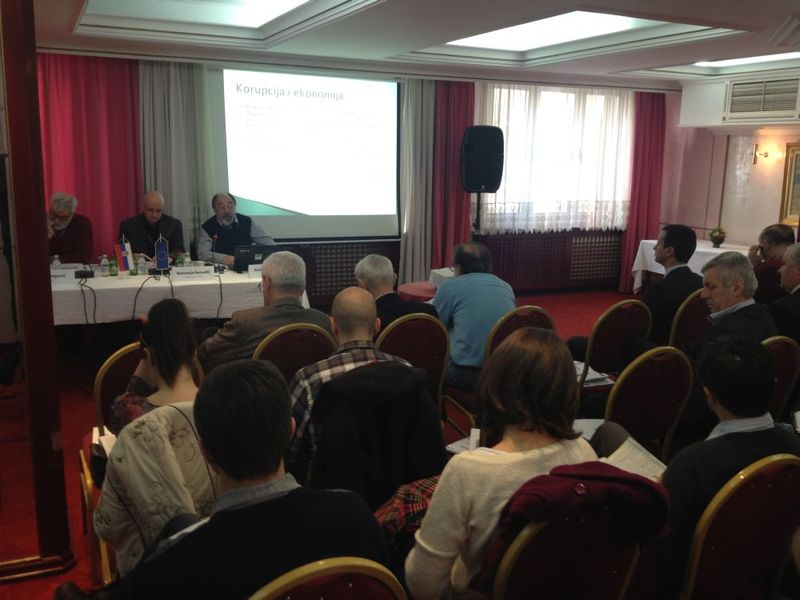 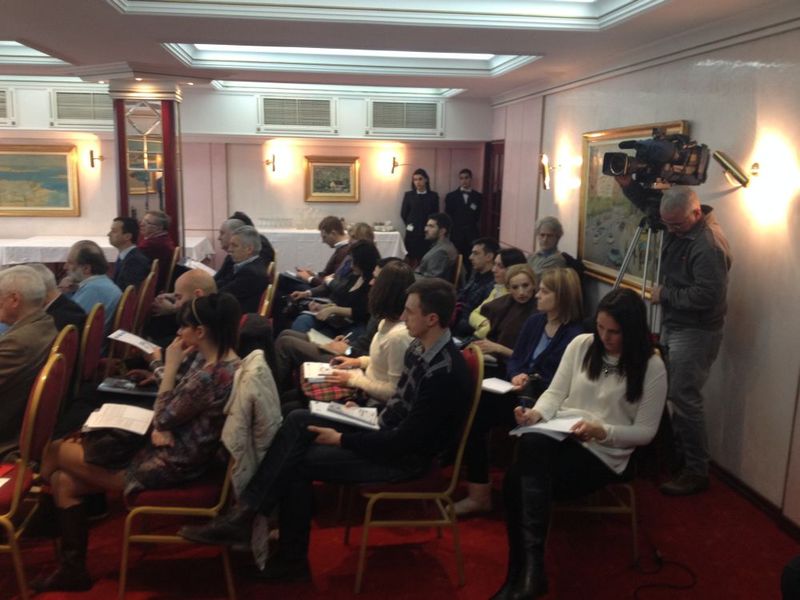 Ruslan Stefanov, Director of the Economic Program at the Center for Study of Democracy and SELDI Knowledge and Outreach...

The Western Balkans have made continued progress in addressing rule of law and governance issues since the turn of...

In the past two decades, the Western Balkan countries have undergone considerable political, social and economic transformations towards democracy...

On 25 November 2014 the Regional Anti-corruption Initiative (RAI), a member of the SELDI network, and the Centre for...

SELDI has launched a call for proposals. Deadline March 4, 2019. We look forward to your proposals. The Southeast European...

According to SELDI’s Corruption Monitoring System the Southeast region and Macedonia suffer from a systemic problem with bribery, which hints...