On 22 May 2013 the SELDI (SouthEast Europe Leadership for Development and Integrity) network held an Inception Conference for its civil society anti-corruption effort in the Western Balkans and Turkey in the city of Belgrade, Serbia. The network partners, together with governmental organizations, CSOs, international and European Commission` representatives discussed various strategically important topics, including Anticorruption Strategies and Institutions in Serbia and South-East Europe; Transparency in Public Finances; and Monitoring of Corruption and Anticorruption Reforms.

Mr. Boris Begović, President of the Center for Liberal-Democratic Studies, Serbia, opened the event, welcoming the participants. Mr. Ruslan Stefanov, Director of the Economic Program at the Center for the Study of Democracy, Bulgaria, and Project Coordinator of the SELDI network, extended gratitude to the EU Commission, as well as to USAID, which has in the past supported CSD in building and implementing monitoring of anti-corruption initiatives, thus allowing to employ similar methodology today, in a pursue of seeing a ten-year development perspective in the field of anti-corruption in the region of SEE. Mr. Stefanov also highlighted the fact that coming together, the SELDI network and its partners are on the right path towards finalizing the initiative`s Action Agenda and Strategy, as well as building a sustainable platform for advocacy, involving the most relevant stakeholders in the region.

Mr. Rodoljub Šabić, Commissioner for Information of Public Importance and Personal Data Protection, stressed the fact that in Serbia, corruption is not only a matter of justice, but of a survival. He highlighted that access to information is a strong agent in the fight against corruption, as it enables citizens to be involved in combating corruption, which is a vital precondition for increased transparency.

Ms. Yolanda San Jose, Head of Operations at Section I of the Delegation of the European Union to the Republic of Serbia noted the country`s progress in the fight against corruption, calling for a zero-tolerant policy with regard to the social phenomenon. However, challenges remain in terms of prosecution effectiveness, capacity of relevant institutions, as well as of legislative and institutional provisions. Ms. San Jose stressed the fact that civil society organisations are crucial in overcoming these challenges.

Ms. Susan Fritz, Mission Director of USAID Serbia directed the participants` attention towards three key messages: (1) Regional experience matters, despite national differences and SELDI is an example of why such initiatives are important; (2) It is not absolutely necessary to â€œinventâ€ new tools in the fight against corruption. Implementing existing tools and initiative in a more efficient and effective manner could provide for greater impact, both from government and CSOs perspective; (3) Political leadership and standing does matter for improving the anti-corruption environment both nationally and regionally.

Mr. Henk Visser, DG Enlargement, D3 Regional Programmes Unit, European Commission, highlighted the importance of civil society, especially with regard to the variety and comprehensiveness of its impact in all areas. According to Mr. Visser, governments often choose to see only the selected segments of social challenges, thus ignoring pressing issues. The role of civil society is to highlight these issues.

During the first panel discussion on Anticorruption Strategies and Institutions in Serbia and South-East Europe: States of Play and Challenges, Mr. Branko Lubarda, President of the Council, Serbian Anticorruption Agency, Serbia for the provision of strict rules and enforcing of the obligations of the anti-corruption agencies, as well as of the need for such agencies to increase their influence in matters, such as political party financing.

Mr. Nemanja Nenadić, Programme Coordinator of Transparency International in Serbia, who also partiticipated in the process of drafting the new national anti-corruption strategy, remained critical of some basic issue, yet to be decided before the finalization of the document. The most notable example mentioned was the fact that it is still not clear what the structure of enforcement bodies tasked with combating corruption is going to be.

Ms. Jonida Narazani, Executive Director of the Albanian Center for Economic Research (ACER), discussed the Albanian National Strategy on Prevention and Fighting Corruption and Transparent Governance 2008-2013. She concentrated on the state of implementation of the Strategy and the remaining challenges for its successful application. In addition, Ms. Narazani highlighted several recommendations for Strategy revision.

Ms. Ilina Mangova, Project Manager/Researcher at the Institute for Democracy IDSCS, FYR of Macedonia discussed the application of a new method to measure corruption, which breaks the social phenomenon into four corruption levels – Top, High, Mid and Low.

Mr. Ruslan Stefanov addressed the raised debate on what the term political will entails in practice. Namely, it consists of several interrelated factors, including the undertaking of new initiatives aimed to curb corruption; the presence of diagnostic tools to establish the underlying reasons for corrupt practices; mobilizing the public in support of anticorruption reforms; enforcing real and adequate sanctions in the process of reform implementation; as well as achieving consistency in anticorruption endeavors. Mr. Stefanov also discussed the existing common corruption problems in the SEE region, as well as the anti-corruption development in the region in the past 5 years.

During the second panel discussion on Transparency in Public Finances: Corruption and Anti-corruption in Public Procurement and Public Finances, Ms Mirjana Popović, Journalist, Center for Investigative Reporting (CIN), Bosnia and Herzegovina, gave an overview of the progress of BiH in the area of anti-corruption, based on the EU progress reports. Major challenges remain, especially in the area of public procurement. Legislation is largely in place but lack of capacity results in marginal implementation. Ms. Popović gave concrete examples of misuse of public funds in BiH.

Ms. Dina Bajramspahić, Public Policy Researcher at Institut Alternativa, Montenegro, discussed the challenge of corruption in public procurement in the country. The process of awarding public procurement contracts is highly politicized, with notably low number of investigations and criminal charges. Main challenges include weak parliamentary control, inadequate planning process, as well as issues related to weak legislative provisions, mainly with regard to law on conflicts of interest and political party financing. Increased transparency of concluded projects and audits, as well as legislative amendments were mentioned as recommendations for improvement.

Ms. Etida Zeka, Expert at INSTITUTI RIINVEST, Kosovo, gave a general overview of the corruption in public procurement in the country, while paying attention to recently adopted legislative amendments and recommendations provided by various stakeholders.

Mr. Emre Dönmez, Good Governance Program Project Coordinator at the Turkish Economic and Social Studies Foundation (TESEV) focused on the Turkish Court of Accounts Law and its potential for increasing the transparency of public finance in the country. Mr. Dönmez presented in details the Turkish Court of Accounts and its historic development and competencies. The core thesis revolved around the fact that this institution could become one of the most important agencies for transparency and preventing corruption in Turkey.

Mr. Boris Begović, President of the Center for Liberal-Democratic Studies in Serbia stressed that good legislation on public procurement does not necessarily entail eradicating corruption. He also directed the attention to the fact that corruption in public finances also includes subsidies, which, in the case of Serbia constitute between two and three percent of GDP. Mr. Begović compared the underdeveloped state aid mechanisms in the country with the more advanced and competition-based EU instruments.

The followed discussion centered around the idea that the core issue is not the public procurement share of GDP, but how it is used. Public procurement is based on set of principles for the functioning of the free market and society. Its purpose is not to save money, but to get the best quality for a certain amount.

During the third panel discussion on Monitoring Corruption and Anticorruption Reforms in SEE: the role, capacity and integrity of the civil society, Mr. Boris Begović discussed a proposal for new format of the public database on crime. The basic features for the new format include a necessary condition for suspects to be identified and criminal complaint to be submitted (justified exceptions), and sufficient condition, which states that criminal complaint must not be rejected due to the lack of evidence.

Mr. Munir Podumljak, Executive Director of Partnership for Social Development, Croatia went into a discussion about the integrity and accountability of CSOs, and underlying assumptions and discourses about the role of civil society. Mr. Podumljak also pointed to the fact that CSOsâ€™ advocacy actions and policy consultations in its essence represent the negotiations among the stakeholders, and the first principle for successful negotiations is the balance of power.

Mr. Todor Yalamov, Senior Analyst, Center for the Study of Democracy in Bulgaria discussed data confrontation and big data, as instruments for policy changes, arguing that accepting that there is a problem is half of the solution and that turning data into algorithms and technologies could be of great value added.

Ms. Ljiljana Smajlović, President of the Serbian Journalist Association spoke about the influence of the media and the differences between the previous government and the new model of governance, which is seemingly being applied today and which has put the topic of anti-corruption on the top of the agenda, also through increased public awareness and media independence for more extensive coverage on corrupt practices.

Ms. Marija Sazdevski, Project Officer at the Macedonian Center for International Cooperation (MCIC) presented the findings of a comparative research on conflict of interest legislations between various countries. In addition, Ms. Sazdevski discussed recent developments in the civil society sector and highlighted the importance of improving CSO management practices.

Mr. Vladimir Radomirović, Editor-in-Chief of Portal â€œPištaljkaâ€ (The Whistle), Serbia presented an different perspective of the fight against corruption by describing how whistleblowers control corruption through an online platform, which allows citizens to post anonymous, encrypted tip-offs. According to Mr. Radomirović, the future is a CSO-based journalism, eradicated from political pressure and corporate interests.

The followed debate centered on the current political effort to counter corruption in Serbia and whether or not this demonstration of political will is genuine or simply, pursue of corruption scandals is positively suiting the leading political party and its public rating. Another topic revolved around views on improving state-civil society dialogue at regional and national level and on possible corruption counter-measures. In conclusion, manners in which all the insights, shared during the conference, could and would be used for the future development and successes of the SELDI network were also deliberated.

Presentations from the participants in the panel discussions 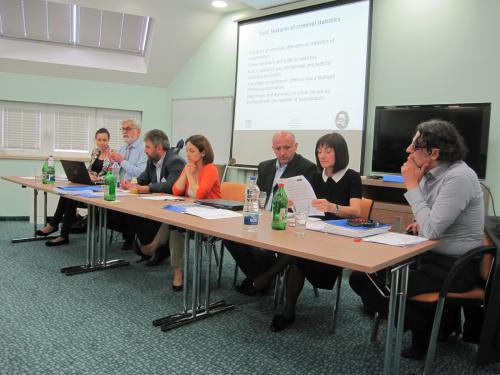 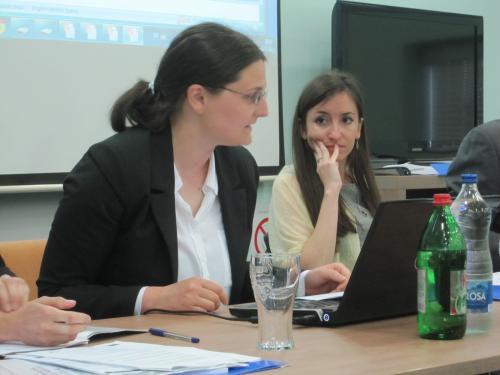 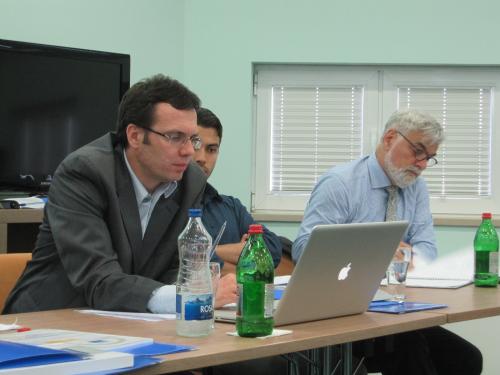 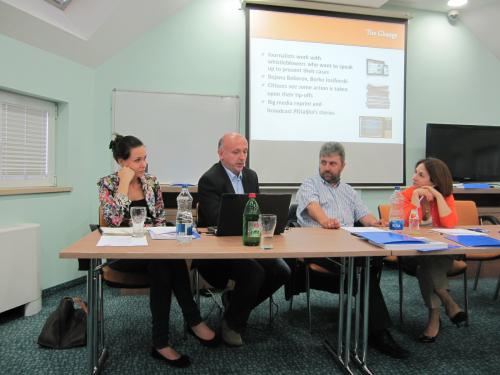 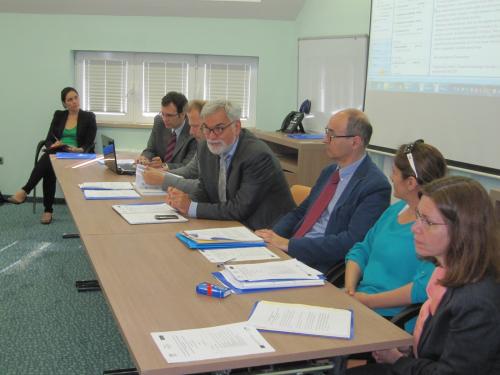 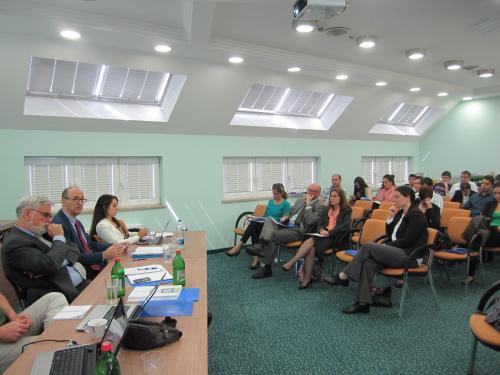 On 11 December 2014 the Center for the Study of Democracy organized the Eleventh Anti-Corruption Policy Forum. During the...

On 9 September 2015 Mr. Ruslan Stefanov, SELDI Coordinator and Director of the Economic Program of the Center for...

The 3-day training, organised by the SELDI anti-corruption initiative on 12-14 June 2019 in Sarajevo, had as key objectives...

SELDI’s partner from Montenegro, the Center for Democratic Transition (CDT), in collaboration with Institute Alternative, held a series of...

The British Embassy to Bulgaria along with the Center for the Study of Democracy, which acts as the Executive...