On the 23 and 24 May, 2013 together with its SELDI network partners, the Center for the Study of Democracy took part in the Framework for Partnership Agreement Inception Conference in the city of Belgrade, Serbia. Organized by the European Commission under the slogan EC and CSO Partners: Growing Together, the conference provided for a valuable working experience and unique opportunity to meet all currently implemented projects under the Instrument for Pre-accession Assistance (IPA) Civil Society Facility (CSF).

During the workshops, Ms. Daniela Mineva, Research Fellow at the Economic Program of the Center for the Study of Democracy, Bulgaria, presented the Strategy and Action Agenda of the SELDI network, as well as shared the experiences and developments of the first six months since the beginning of the project. Now in its final stages of completion, the SELDI Strategy and Action Agenda was distributed to about 140 stakeholders, including CSOs and policy-makers from the region of South-East Europe, as well as to international organisations and experienced researchers in the area of anti-corruption.

During a panel dedicated to reviewing the conclusions of the conducted workshops, Mr. Ruslan Stefanov, Director of the Economic Program at the Center for the Study of Democracy, Bulgaria, and Project Coordinator of the SELDI network presented the discussed challenges and lessons learnt. Many project, despite the varying thematic areas, share common challenges, mainly in terms of the general regional, legal and political environment in the SEE region, as well as of internal (between project partners) and external (between various stakeholders) communication, network coordination, as well as administrative difficulties (especially related to project finances and reporting activities). Notable among the lesson learnt is the opportunity for cooperation, even between networks of seemingly non-related areas of expertise. 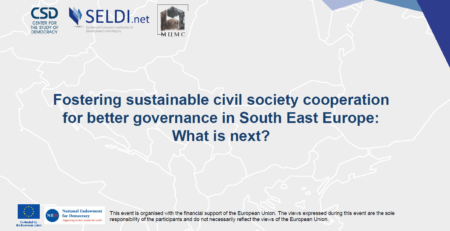 The civil society in Southeast Europe faces a number of challenges related to overwhelming reliance on external donors, shrinking civil...