According to SELDI’s Corruption Monitoring System the Southeast region and Macedonia suffer from a systemic problem with bribery, which hints at the need of sustained institutional change. Some of the most compelling historical examples of countries moving from systemic bribery to good governance regimes have taken over 40 years, which is why the governments and CSOs from the region need to focus on starting the necessary reforms now. Mr. Ruslan Stefanov, SELDI Coordinator and Director of the Economic Program at the Center for the Study of Democracy made these key points during the conference “Effective Combating of High-Level Corruption: Matter of Person or a System?”, held by SELDI’s partner, the Macedonian Centre for International Cooperation, with the support of USAID on 22 March 2016 in Skopje.

Mr. Stefanov noted that EU’s pre-accession monitoring and conditionality can push the process in the right direction, however the anticorruption efforts should be mainly based on the realized need of each country and genuine political will. He concluded that Macedonia is clearly having the same systemic problem with corruption, which has taken very deep root in terms of people’s resilience and trust in governments’ policies. How the wire-tapping scandal is handled is going to be of extreme importance to the future trust of citizens in the national policies.

Key speakers at the event were Ms Laura Codruta Kovesi, Chief Prosecutor at the National Anticorruption Directorate of Romania; Mr. Adnan Jashari, Minister of Justice, Republic of Macedonia; H.E Jess L. Baily, United States Ambassador to the Republic of Macedonia; Mr. Marko Zvrlevski, Chief Public Prosecutor, Public Prosecutor Office and Ms Katica Janeva, Special Public Prosecutor, Public Prosecutor Office, Republic of Macedonia. Ms Laura Codruta Kovesi also underlined that peoples’ confidence is a significant indicator for the trust in institutions fighting against corruption. She shared that in 2015, the National Anticorruption Directorate of Romania (DNA) has brought charges against 1,250 people, including one head of government, five ministers, MPs, mayors, managers of national companies. A total of 970 of them have been convicted, while the reminder of these cases are being processed. DNA has even demanded a pre-trial detention for members of the parliament and one judge of the Constitutional Court, as well as EUR 500 million of wealth in cash and property, obtained through criminal deeds, to be confiscated. Mr. Marko Zvrlevski noted several successful anti-corruption cases in Macedonia, including the ones against former prime minister, vice-premier, deputy minister, Central Bank governor, Customs Administration director, mayors, managers of enterprises, judges, prosecutors and police chiefs.

Presentation by Mr. Ruslan Stefanov, SELDI Coordinator and Director of the Economic Program at the Center for the Study of Democracy, Bulgaria (Adobe PDF, 514 KB) 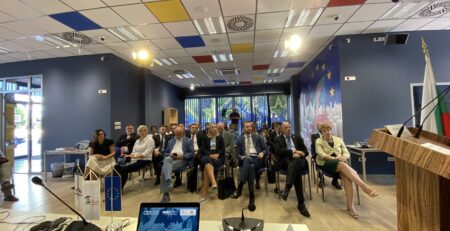