On 28 June 2016 the Center for Investigative Reporting (CIN) and local partner organizations hosted the conference “Civil Society for Government Accountability” in Sarajevo, organized in the framework of the Southeast Europe Leadership for Development and Integrity (SELDI) initiative with the support of DG NEAR and Civil Society Facility (CSF) of the European Union (EU). The conference presented the main findings, results and policy messages of a comprehensive regional survey, conducted in eight countries from the Western Balkans and Turkey, on the corruption attitudes of citizens, using the SELDI Corruption Monitoring System methodology. The research shows worrying trends of increase of the perceived level of corruption in the countries across the region, especially in Bosnia and Herzegovina.

Ms Jasenka Perovic, team Leader of the Regional TACSO office in BiH, gave an opening speech where she underlined the importance of regional cooperation and exchange of knowledge and experiences among organizations in the region. She presented the role of TACSO in this process, including support to activities of SELDI network.

Two of key presentations on the “Role of civil society in anti-corruption reforms and Strategy of the civil society through joint strategic program for good governance and fight against corruption 2020” and “Presentation of findings of SELDI Survey 2016”, were held by Leila Bičakčić, Director of CIN and Mr. Srđan Blagovčanin, President of the Board of Directors of Transparency International BiH (TI BiH). Ms Bicakcic gave an overview of relevant research in area of anti-corruption conducted by distinguished international and regional organizations (Bertelsman Index, Nations in Transit, Corruption Index), emphasizing importance of involvement of civil society in continuing monitoring of activities in anti-corruption. She also presented the basic principles of the strategy for civil society, where continuing education, knowledge sharing and capacity building are essential elements in strengthening position of CSOs. Mr. Blagovčanin presented detailed analysis of findings of SELDI research, conducted during 2016.

The following two panels were mostly dedicated to role of the civil society, from the viewpoint of the institutions, media and other stakeholders in the society. Within the first panel, opening presentation was given by the Deputy Director of Anti-Corruption Agency of BiH, Mr. Dragan Slipac, who emphasized the importance of cooperation with the civil society. The Agency has been one of few true supporters and openly cooperative institutions in the country, which benefited to both sides. The Agency received necessary support and knowledge, assistance and even documents (in a form of research and other studies) from the civil society which gave them good basis to build upon. Eldin Karić, Director of ACCOUNT network, spoke about a number of the network’s initiatives aimed towards documentary work and presenting evidences of corruption in the form of TV documentaries. They tried broadcasting those documentaries through TV channels in BiH, but editors of those outlets were not cooperative. Mr. Karić emphasized lack of readiness on the side of institutions to act upon presented evidences of corruption, which resulted in low level of trust of the citizens in the state institutions and the system as a whole. Professor Mladen Mirosavljević gave an overview of a number of real cases of misuse of power and/or office, that were reported by media but never reacted upon by institutions, particularly judicial institutions that never initiated investigation. Aleksandra Martinović from TI BiH emphasized the importance of civil society involvement in decision making process and the positive aspects of the EU integration process on strengthening rule of law an good governance, which lead toward successful fight against corruption. Final presentation was given by Professor Nerzuk Ćurak, speaking about an overarching issue of lack of accountability within government, which leads to wide spread of corruption. He emphasized that corruption and lack of accountability should be viewed in a larger context through analyzing the political system as a whole. Regarding the presented results of SELDI corruption survey, Professor Ćurak underlined the tendency within citizenry to view political and local leaders as the most corrupted groups, which he recognized as an attempt to transfer part of their responsibility to political leaders.

The second panel focused on the regional perspectives and potentials for cooperation. The panel was opened by Mr. Zoran Ivančić, Director of the Center for Public Integrity, who gave an overview of the work and role of civil society in the region. Mr. Ivančić emphasized the lack of analytical capacities within the CSOs in BiH, particularly in the context of complicated constitutional structure in BiH, which additionally complicates the monitoring process. Mr. Garret Tankosić-Kelly, Director of SEE Change Net, presented experiences of the organizations in the region with a special overview of the importance of the role of CSOs in creating a pressure to office holders to initiate real and sustainable changes. Mr. Mervan Miraščija, Program Manager of Open Society Fund in BiH, emphasized the importance of regional cooperation among CSOs and a number of positive aspects such cooperation could result in: shared good practices, creating joint portal within advocacy activities, etc. Ms Leila Bičakčić from CIN presented a number of good practices within SELDI initiative, which could be used as a sample for other organization – both to join the network and contribute with their experience and knowledge, or through setting similar initiatives in their own regions. Ms Jasna Panjeta, Program Officer at the Regional Anti-Corruption Initiative (RAI) spoke about results of public polling called Regional Barometer, conducted by the Regional Cooperation Council (RCC), which showed that a number of citizens have positive reaction on regional cooperation. She presented positive examples of anti-corruption techniques used in countries where RAI is active, including use of IT tools and other methods for increasing transparency of government.

Mr. Blagovčanin summed up the discussion and concluded that it is necessary to view corruption in a wider context as primarily social and political problem, which could not be dealt with as a technical issue only. It is of essential to define the role of civil society as a link between citizens and government, where civil society is able to articulate and generate citizens’ demands for reforms and increased accountability of public officials.  In that regard, cooperation among civil society organizations contributes to the increase of their capacities and is enabling synergies for fulfilling their goals. 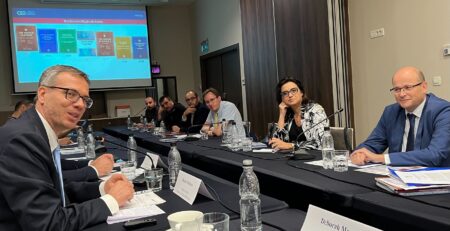 Bosnia and Herzegovina is currently the most unstable and vulnerable country in SEE with botched EU accession prospects, dysfunctional federal...

In the last decade, Russia has used a range of tools to amplify its economic footprint in Central and Eastern...

On 28-30 April 2015 the Center for Research and Policy Making (CRPM), Macedonia held an international conference: Exchange of EU...