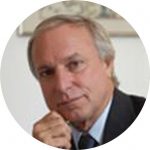 William Loris currently serves as Senior Lecturer and Program Director of the LL.M. Program on Rule of Law for Development (PROLAW) which is delivered at Loyola’s campus in Rome. He joined Loyola in 2010 after a distinguished career in international service.
Mr. Loris served for five years in Abidjan, Ivory Coast as a Regional Legal Advisor for West Africa to the US Agency for International Development (USAID), working on the legal aspects of the USAID program across West and Central Africa.  He then served for five years in Cairo as a Legal Advisor in USAID’s Egypt mission. Building on this experience, he joined two other lawyers in 1983 to co-found the International Development Law Institute (IDLI), a Dutch foundation.  IDLI was later transformed into an inter-governmental organization, the International Development Law Organization (IDLO), by an international convention. IDLO is now a key international institution in the promotion of the rule of law in developing countries, countries in economic transition and countries recovering from violent conflict.  Mr. Loris served in successive periods as IDLO’s General Counsel, Director of Programs and finally, by appointment of the IDLO Member States, Director General. Mr. Loris represented IDLO at the World Economic Forum (WEF) from 2005 until 2010, and was a member of the WEF’s Global Council on Corruption. An outgrowth of that membership was Mr. Loris’ publication in the World Bank Legal Review of his groundbreaking article on Private Civil Actions against corruption.
In these capacities Mr. Loris has been a leading advocate for the rule of law throughout the developing countries and countries in economic transition and for the improvement of the position of such countries in international negotiations. He led and participated in projects across the developing world aimed at improving justice and the rule of law.  The PROLAW curriculum reflects Mr. Loris’s experience and his conviction that sustainability of progress toward the rule of law, better governance and democracy depends significantly upon the quality and appropriateness of the advice and guidance which national legal experts bring to the reform agenda.  Mr. Loris is also a member of the Steering Committee of the World Bank’s Global Forum on Law, Justice and Development.

Mr. Loris holds a JD degree, as well as Bachelor Degree in History, from the Santa Clara University (one year of the BA degree was undertaken at Loyola University Chicago’s Rome Center).  He also holds an LLM degree in International and Comparative Law from the Vrije Universiteit Brussel in Belgium.