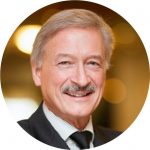 Victor Jackovich left U.S. government service in 2004 after 33 years, including 13 years at the rank of Ambassador.  In May 2014, he was named Chairman of the EU-linked Business Advisory Council for Southeast Europe and Eurasia (BACSEE).  He serves on the Boards of the Business Advisory Council for North Africa (Tunisia), the Mediterranean Development Initiative (Washington), the Central and East European University Network (Venice), the Center for European Perspective (Slovenia), and numerous other associations in the United States and internationally.

During 2002 and 2003, Jackovich was in Afghanistan as the U.S. government’s Senior Political Advisor for U.S. and Coalition Operations.

From 1999 to 2002, Jackovich was Associate Director of the George Marshall Center in Germany.  The Marshall Center is operated jointly by the U.S. and German governments and is the premier training institute for political and military leaderships in Eastern Europe and the former Soviet Union.

Prior to this, Jackovich was Acting Deputy Assistant Secretary of State (1999) and headed up a variety of U.S. government initiatives, including the Department of State’s Office of Southeast European Initiatives.

Throughout government service, Jackovich specialized in launching new operations and leading them through their formative years.  During the warfare in the Balkans, he opened the U.S. Embassy in Bosnia (1994) and spent the conflict years in Bosnia as the first U.S. Ambassador there (1992-1995).  He was U.S. Ambassador to Slovenia (1995-1998).  He headed the first U.S. representation to the independent state of Moldova (1992), was Director of the Department of State’s Task Force on the Balkan crisis (1990-91) and led U.S. delegations to international conferences on the Balkans in Geneva and elsewhere (1992-93).

In June 2011, Jackovich was awarded an Honorary Doctorate from the University of Sarajevo in Bosnia and Herzegovina.

Among his many awards is the U.S. government’s Distinguished Presidential Award for diplomatic service and the American Bar Association’s Max Kampelman Award for “advancing the rule of law in Central and Eastern Europe and the former Soviet Union.”  In addition, he holds the Golden Eagle Award, conferred by the Republic of Bosnia and Herzegovina;  the Serbian Civic Society Award;  and, the Distinguished Civilian Service Award, conferred by the U.S. Chairman of the Joint Chiefs of Staff for “policy guidance provided and special programs designed … to accelerate integration of new democracies of Eastern Europe and former Soviet Union into NATO and Euro-Atlantic associations.”