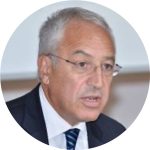 Professor Spyridon Flogaitis is the Director of the EPLO and President of its Board of Directors. He is Professor of Administrative Law at the Law School of the University of Athens, Attorney at Law at the High Court and the Council of State of Greece, former President of the United Nations Administrative Tribunal and former Acting Minister of Interior of Greece (2007 and 2009). Professor Flogaitis was born in Lefkas (Greece) and graduated summa cum laude from the University of Athens with a degree in Law. He holds a PhD in Law from the University of Paris II Panthéon-Assas and a PhD in History from the University of Paris I Panthéon-Sorbonne. He speaks English, French, German, Italian and Greek. Professor Flogaitis is the author of many publications in the area of public law, such as The Evolution of Law and the State in Europe, Seven Lessons being most recently published in 2015. He was awarded with the distinction of Chevalier de la Légion d’Honneur of the French Republic and the distinction of Cavaliere dell’Ordine di Merito of the Italian Republic.