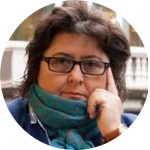 Prof. Alina Mungiu-Pippidi (born 1964) is a professor of policy analysis and a governance scholar. She defended a PhD in social psychology (1995) and additionally studied political science at Harvard’s Kennedy School of Government. Professor Pippidi is the author of a theory of governance, defined as the set of formal and informal institutions determining who gets what in a polity and a student of institutional change. Her theory was published in various journal articles, most notably as ‘Becoming Denmark: How Societies Build Control of Corruption’ (Social Research, 2014) and ‘Corruption: Good Governance Needed to Power Innovation’ (Nature, 2015) and at greater length in a 2015 Cambridge University Press book A Quest for Good Governance. In earlier years she wrote on post-communist transition, nationalism, ethnic conflict and Europeanization. She has Hirsch (Google Scholar) index of 18 and several International Science Index (Thomson ISI) publications. She is also the author of policy film documentaries, one of which was screened by the BBC (A Tale of Two Villages), another showing the policy implications of EU’s Eastern border (Where Europe Ends) Her governance work is cited and applied by a string of development organizations for which she consults occasionally, such as the World Bank, UNDP, NORAD, DFID, OECD, but also by some EU governments and the European Commission. She designed several good governance assessment methodologies, most notably one to evaluate integrity in public universities published in Times Higher Education Supplement. She chairs the European Research Centre for Anticorruption and State-Building (ERCAS) at Hertie School of Governance, where she teaches democratization and comparative public policy.