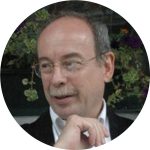 Alain Servantie graduated in Law, Political Sciences and Sociology in Bordeaux and joined the European Commission in 1971. He hold office in several positions within the European Commission. From 1971 to 1974 he worked in the Department of Relations with the Mediterranean Countries. He was Deputy Head of the EEC Information Office in Ankara between 1975 and 1981. In 1981 he changed to the Directorate of Relations with the Mediterranean Countries. He then worked in the service dealing with intergovernmental cooperation in the Secretariat-General from 1983 to 1987. From 1987 to 2000 he worked at the Directorate General for Telecommunications, Information Industries and Innovation. Between 2000 and 2001 he was head of the Turkish team in the DG Enlargement. Mr. Servantie worked at the Directorate-General for Enlargement from 2000 till 2012, dealing in particular with interinstitutional reations. He retired in November 2012. Mr. Servantie is author of several books and articles, such as: ‘Historical changes of paradigms in the Western image of the Turks – from a theology of the Inferno to lecturing democracy’, in Dünyada Türk imgesi, Kitap Yayınevi, Istanbul, 2005.