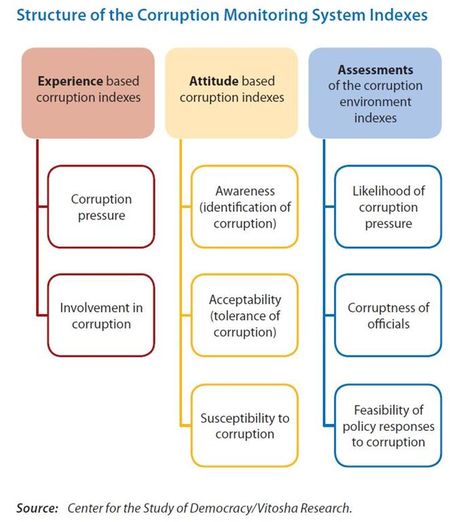 The Corruption Monitoring System (CMS) was designed and developed by CSD in 1998. Introduced at a time when corruption measurement was confined to public perceptions, the CMS launched a measure of the corruption victimisation of individuals by public officials accounting for their direct experience with various corruption patterns. Based on CMS diagnostics, assessments could be made about the dynamics of the prevalence of corruption patterns in a society. The CMS methodology allows comparability of data across countries and registers the actual level and trends of direct involvement in administrative corruption, as well as the public attitudes, assessments and expectations relating to corruption. CMS diagnostics have been applied in Bulgaria since 1998, in Southeast Europe in 2001, 2002 and 2014, and occasionally in Georgia and Moldova. Some CMS concepts have also been modified and included in the Eurobarometer surveys on corruption; this makes CMS data comparable to Eurobarometer data.

Full description of the CMS methodology is available in the Methodological appendix to the SELDI Regional Anti-corruption Report 2014.

Most academic and policy analyses on corruption usually start with the assertion that corruption is a multifaceted phenomenon that is difficult or impossible to measure. The measurement problem of multi-facet phenomena as corruption boils down to definition and operationalisation of the underlying concept. Defining what is being measured scopes the interpretations of data and the types of conclusions that could be made. The CMS is one of the possible measurement approaches to corruption. Its main objective is to provide statistical estimates of the prevalence of the most common incidents of corruption and has diagnostic and descriptive functions. In the CMS context, corruption is conceptualised as a specific type of social behaviour which includes specific forms of interaction between actors, attitudes associated with these interactions and a set of perceptions which relate to the interactions (serving both as reflections of the interaction and prerequisites which define the behaviour strategy of the actors). Corruption refers to a specific group of interactions: the public is provided with services by government institutions, in the process of which it deals with officials who are employed by these institutions. Corruption is described through the “principal-agent model”: members of the public (clients) interact with government institutions (principal) through officials (agents); agents act on behalf of the principal who defines their rights and obligations and entrusts them with certain discretionary power. Corruption is an interaction in which officials in government institutions (agents) abuse the discretionary power they have been entrusted with by these institutions (principal) in their interaction with the public (clients). This definition has two key elements which need to be further operationalised: “abuse” and “benefit”. Both should be present for certain behaviour to be categorised as corruption. The relation between these concepts could be defined as a “form-content” relationship. The “benefit” is the form of the transaction, while the “abuse” refers to the content of the transaction – the type of resource that is being offered in exchange for a benefit. Varieties of corruption behaviour arise because of the variation in both form and content: of the benefits that are being supplied by clients to agents and of the types of abuse of public power are the content of the exchange. The most common word used to label the forms of corruption is “bribe.” Regarding content, variations in corruption behaviour could be numerous but they depend on what is being done, how it is done and who is the perpetrator.

In more concrete terms the above variation in corruption behaviour could be summarised in four sub-concepts:

The main indicators of the CMS describe corruption (as a social phenomenon) using three groups of concepts: experience, attitudes, and perceptions. Information on CMS indicators is collected through a survey questionnaire. Indicators are first broken down into survey questions and at the analysis stage the information is aggregated to form the CMS indexes. This allows for a more robust interpretation of findings and has been a way to keep findings aligned to the theoretical background of the study. Over the years, two methods of aggregation have been used by SELDI. In the 2001 – 2002 round of SELDI diagnostics, as well as in the SELDI Action Agenda 2013, a quazi-normalisation procedure was used, which calculates individual respondent scores for each respondent and “places” scores on a scale ranging from 0 (“best value” in terms of corruption) to 10 (“worst value” in terms of corruption). In the 2013 – 2014 diagnostics, a direct allocation of respondents into specific (for each indicator) categories was used. Essentially, both procedures render similar results, but have some important differences. The advantages of the normalisation method are that all indexes use the same scale and are in this way comparable in terms of values. The disadvantage of the index calculated in this way is that it is not directly interpretable. The conclusions that can be made would be based on time series and evaluation of dynamics over time. However, an index of 0.5 or 5.6 does not directly relate to the content of questions and the specific aspects of the concept it represents. Another disadvantage is that possibilities for statistical analysis of data are largely limited. The main advantages of the direct allocation method (conditional recoding of variables that compose each indicator) are two. First, results are directly interpretable in terms of content. In this way the index is more or less “self-explanatory” and needs little input explanations as to what is measured and presented. Second, the index variables provide all possibilities for statistical analyses and tests. A limitation in this respect is that index variables are measured on weak scales (nominal).

“Involvement in corruption” captures the instances when individuals make informal payments to public officials. The questions used to gather information about this indicator are victimisation questions and reflect experience during the preceding year. The indicator summarises citizens’ reports and divides them into two categories: people without corruption experience (have not given bribes) and people with corruption experience (have given bribes at least once during the preceding year).

“Corruption pressure” reflects instances of initiation of bribe seeking by public officials: either by directly requesting an informal payment or by indirectly indicating that an informal payment would lead to a positive (for the citizen) outcome. CMS results have shown that pressure has been a decisive factor for involvement. Most corruption transactions occur after the active solicitation of payments by officials.

While awareness captures the knowledge component, acceptability of corruption captures tolerance (or lack of tolerance) towards corruption. It summarises whether it is acceptable to the public for members of the parliament or the government, as well as civil servants at central and local government level, to receive gifts, money, favours or a free lunch (“get a treat”) in return to solving someone’s problems.

“Susceptibility to corruption” reflects the tendency of respondents to react to two hypothetical situations – one involves being in the role of an underpaid public official and accepting or denying a bribe that is offered, the other asks about giving a bribe to a corrupt public official, if one had a major problem to solve and was asked explicitly for a bribe (cash). Declaring the denying of a bribe in both situations is interpreted as the respondent being not susceptible to corruption, accepting/giving a bribe in both is interpreted as susceptibility, while giving/taking a bribe in one of the situations and not in the other is defined as “mixed behaviour”.

Assessments of the corruption environment indexes

The experience with corruption and the attitudes towards corruption, as well as the general current sentiment and level of trust towards public institutions in society determine the public’s assessment of the corruptness of the environment. These perceptions are summarised in the following indexes:

Corruptness of officials is an index reflecting perceptions of the integrity reputation of various groups of public officials; it thus constitutes an estimate by the public of the corruptness of the various public services. The interpretation of this index is specific, as it is an assessment of attitudes of citizens towards public officials rather than a measure of the prevalence of corruption in the respective government departments. The added value of this index is that it helps identify top ranking sectors affected by corruption or being least trusted by the public.